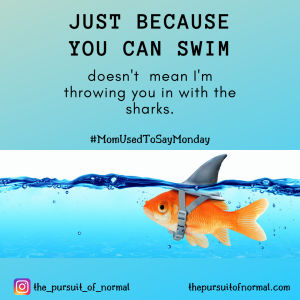 As a teenager, nothing sent my eyes rolling heavenward faster than my mom’s words of wisdom. She had a cliche at the ready in any situation. Little did I know, those quips would be rolling off my own tongue once I became a mom.

Her most famous quote was this: “Just because you can swim, doesn’t mean I’m throwing you in with the sharks.” I like to call this “I trust you. It’s your friends I don’t trust 2.0.”

I hated this one most of all because it inevitably made an appearance when I wanted to do something fun like drive some friends to a movie or go to an unsupervised party. All she had to do was take a breath & I knew what was coming. In seconds I was storming off, mumbling some not so nice words under my breath.

I wasn’t dumb. I knew what she was trying to tell me- I wasn’t ready to handle the situations I wanted to put myself in. But as the mom of teens, it’s even more clear. It wasn’t ONLY about my readiness. It was also about hers.

There are moments (albeit, few & far between) when I feel confident as a parent. I know I’ve done a good job. I’ve taught my kids all I can & their behavior shows me they’re getting it. But when it’s time to turn them loose, I’m stuck because I know what’s lurking out there. And while my little fish can swim, they will be surrounded by sharks who swim better, faster, & more aggressively. Those sharks are more dangerous than anything my little fish has encountered. And as a parent, that’s terrifying.

I understand now, having grown up & experienced a few nibbles & a few painful bites from some sharks for more capable than I ever was, parenting isn’t always about your kids. Sometimes, it’s about you, the parent, and what you’re ready to release your children into. And sometimes, even though they can swim, you aren’t ready to toss ‘em in with the sharks just yet. And that’s ok. You’re the parent. You’ll know when you’re both ready.

Thanks, Mom, for keeping me in the tide pools when I thought I was ready to swim the seven seas. Your willingness to endure my tantrums, eye rolls, & silent treatment gave me time to become an even better swimmer.