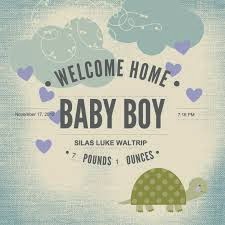 When you’re a parent, Milestones come with the territory.  The baby industry has made sure we don’t miss any of them by providing month by month (and even week by week) descriptions of all the things our kids “should” be doing as they grow and develop. And, conveniently, they’ve created an assortment of products to sell us so we can commemorate each achievement. I just wish they’d tell us where we’re supposed to put all these photo books, growth charts and certificates! I’ve only got so much closet and wall space people!