**Before you read today’s words of wisdom (haha!) head over to Raising Wild Things where my bloggy friend Mackenzie asked to use my Talkblocker post as a Guest Post today.  She’s fantastic, so you’ll want to hang around her site for a bit.  I’ll wait here for you… I promise. **

Last weekend I had the honor of watching two young people get married. I love weddings. The beautiful dresses, the touching vows, the free drinks and let’s not forget the dancing! Mama likes to shake her groove thang. The opportunities for dancing in your almost-40’s are slim pickins’ so I really value a good wedding. The bar scene isn’t for me considering I’m old enough to be the mother of some of these people.  And no matter how much I love Zumba, the lack of adult beverages really hinders my ability to bust out my best moves. So weddings, it is! (Is it wrong to ask some of my friends to divorce and remarry so I can get down?)

But free drinks and bringing the sexy back on the dance floor aren’t the only highlights at a wedding. My favorite part is The Toast. Heart warming memories of a young girl in knee socks and pigtails shared by a teary father and the best man’s retelling of the groom’s college shenanigans always warm my heart.

I have to be honest, though. If I were giving The Toast I don’t think I’d go with the “sappy and silly.” I think The Toast is an important teachable moment that we should take advantage of. Think about it, the bride and groom are trapped in their seats, front and center and heavily slightly inebriated. Seems like a captive audience to me, right?

If I was running the show, I would use The Toast as an opportunity for a little Marriage 101. Not surprisingly, I’ve never been asked to give a toast at a wedding. But if I was, here’s what I’d say to the blushing bride and eager groom… 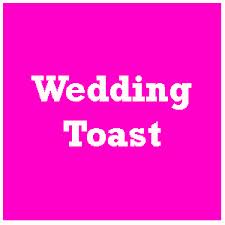 10 Things I Think All Newlyweds Should Know
I think I’d give an awesome Toast.
That’s just my normal.

**Don’t forget to head over to Raising Wild Things!