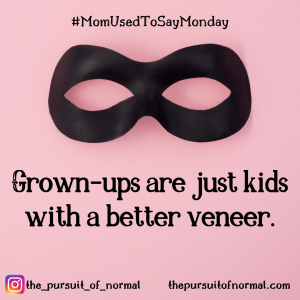 I used to believe that once I became a mom, I’d be a full-fledged adult. If I’m in charge of raising other human beings, I should be done growing up myself, right? Wrong.
⠀⠀
Apparently, life-long learning is a thing & some of us are slow learners… meaning we wrestle with the same bullshit over & over…
⠀⠀
I called my mom crying a few years ago. Surprisingly, it wasn’t kid-related. I was angry & hurt. And, as much as I hate to admit it, I was chewing on a gigantic portion of jealousy with a side order of pettiness.
⠀⠀
“I feel so stupid! I’m 40, not 14!I’m a grown-up & grown-ups don’t have their feelings hurt because their friends are out on the town & didn’t invite them. Grown-ups aren’t this petty & insecure. I’m so embarrassed for feeling like this.”
⠀⠀
“You think you’re the only adult who battles with teenage problems?” she huffed. “I don’t know what kind of grown-ups you hang out with, but the ones I know? We battle pettiness, insecurity, & jealousy just as often as any 14-year old. You want to know why?
⠀⠀
Because grown-ups are just kids with a better veneer.
⠀⠀
“When a 4-year old gets her feelings hurt, she throws a fit. When a 14-year old is hurt, she throws a different type of tantrum (passive-aggressive comments & gossip-filled phone calls included)
⠀⠀
“So, what makes you think 40 is the magic age when all those irrational emotions just melt away?
⠀⠀
“The only difference between being 14 & 40 is that a 40-year old knows she can’t act like that… but it doesn’t mean she doesn’t want to.
⠀⠀
“There will be times when you want to peel that shiny, grown-up veneer right off your face & throw yourself to the ground kicking and screaming. You’ll want to let the world know you’re angry & hurt & bask in your jealously because you’re entitled to be mad.
⠀⠀
“This is why it’s so important to find your people – the ones who will listen & empathize… and then call you out on your bullshit.
⠀⠀
“They’ll make you reapply your grown-up veneer & act your age. Because without those people, you’re nothing but a grown-up acting like a child… and you’re better than that.”
⠀⠀
Psychologists say, there are only 6 basic emotions: anger, disgust, fear, happiness, and surprise. So, it makes sense that we feel a lot of the same things at 40 that we felt at 14. But the truth is, we’re no longer 14.
⠀⠀
For all of my adult life, my mom was my person. She was always there to listen & empathize, but she had no problem whatsoever calling me out on my bullshit & telling me when I was acting like an unrestrained toddler rather than a wife & mother of two. I miss that.
⠀⠀
Some days, I want to act like that 4-year old & cry my eyes out, thrashing around, demanding to know why I can’t have my mom back. I want to lash out when I my church hosts mother-daughter teas. I want to scream when Mother’s Day comes around.
⠀⠀
Then those moments pass & I pick myself up & spit-shine my veneer until is sparkles because I’m a grown-up and that’s what grown-ups do.
⠀⠀
That’s my normal.