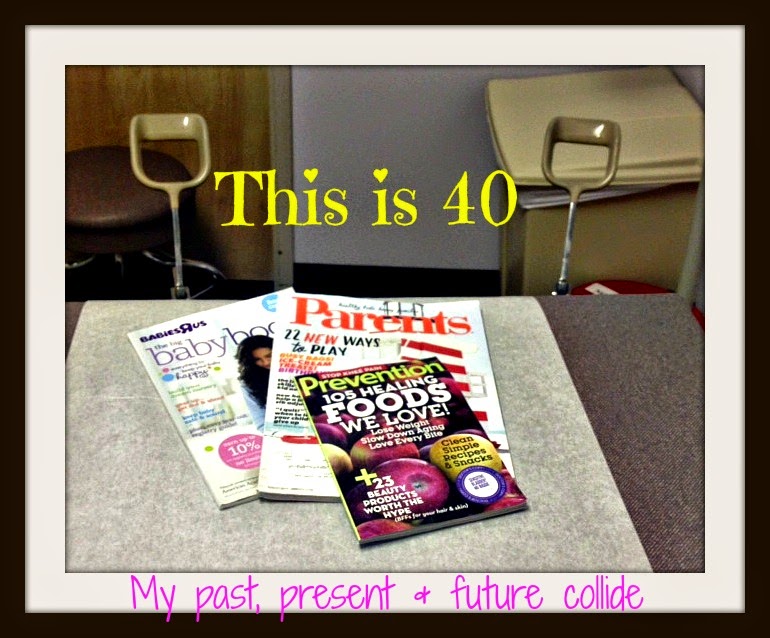 I’m pretty sure the school secretary and nurse were in their 40’s. Maybe they were 60.
I couldn’t tell. I was 8.

I remember when my mom turned 40.  We threw her a surprise party.  She came downstairs early… in her bathrobe. I was 11.

The parents of the first middle school class I ever taught were 40. They asked me for parenting advice.  I was 25, married for 2 years and owned a dog who was poorly trained. Any advice given should have been tossed out the window.

I used to think 40 was old.  I thought it was high-waisted jeans and short hair. I expected it to be complaining about loud music and the way kids dress these days. I thought I’d say “When I was younger…” a lot. I assumed it was the winding down of drinking and definitely the end of sex. I was pretty sure I’d lose my sense of humor but gain a lot of wisdom.

I was wrong on almost all accounts because in 19 hours I’ll be 40 and I can rock a pair of skinny jeans with high boots and even a few pair of jeans whose rise is a bit lower than my mother would consider acceptable.  I have long hair and no intention of cutting it. The loud music pouring from the car next to you at the red light? That’s me. I apologize for my lame dance moves.

Although I certainly think kids today could stand to put a little more on and pull some other things up, I look at a lot of them and wish I had been so bold and creative “when I was younger.” Turns out I was spot on about my usage of that phrase.  Oddly enough my alcohol intake appears to increase in correlation to my sons’ ages… Peculiar.  And sex… SO. NOT. OVER. As for a sense of humor… I may still be 39, but I think I’m funny as hell and I doubt that will change in the next 19 hours.

At 19-hours-shy-of-40 I don’t know if I’d say I’m wiser, but I’ve definitely learned a few things. I’ve discovered the 3 things that keep my marriage working. I have tackled a lot of parenting challenges. But more importantly, I feel confident in my ability to handle the ones I know are coming down the road. I’m more patient. I hope I’m more kind. And I strive to be more loving. I’m a bit more comfortable in my own skin and a teeny bit more accepting of the lumps and bumps on that skin.

I’ve learned a lot about perspective- mine and others.

40 minus 19 hours and I’m happy, settled, blessed.  I have a wonderful, loving, imperfect husband. 2 hysterical, unique, brilliant, imperfect children. A giant, slobbery, imperfect dog.  Being the imperfect wife and mother I am, this motley crew is exactly what I need.  I had the career I wanted and fell into a new one I love even more.

I found my words and better yet, my voice. I’ve shared those words in some pretty important places and even had a few of them put in some books. But I don’t think I’ll ever stop being surprised that people read some of those words regularly… on purpose!

So many seasons of my life are over- school, first fights, flutters in my belly.  The season I’m in now can be equal parts wildly exciting and utterly exhausting.  And the season ahead… Who knows?