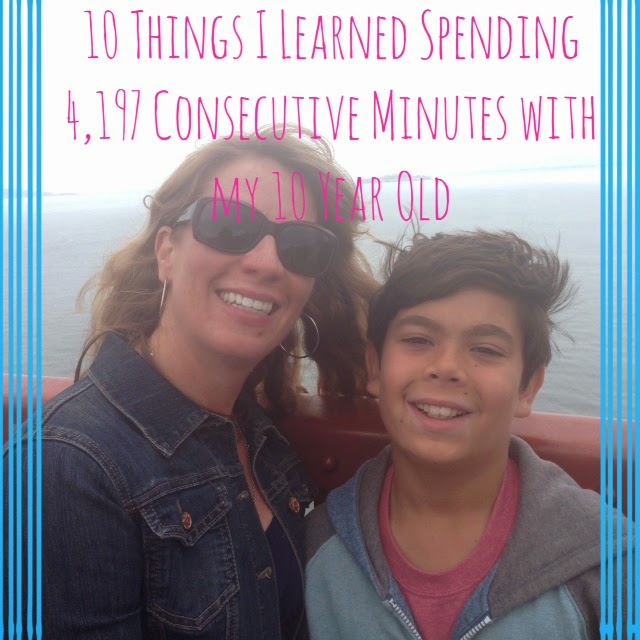 Last week I had the pleasure of spending 3 days traveling to Northern California with my son and his 4th grade class.  Let’s clarify here: “pleasure” is subjective. What is “pleasurable” to one person might be excruciating to another.  I think I fall somewhere in the middle with a slight lean to one side on the pleasure continuum.  I’ll let you guess which side.

While enjoying the all that Sacramento and San Fransisco have to share we walked the Golden Gate Bridge, panned for gold in the American River and were given a tour of the State Capitol by our local Assemblyman! Did you know this kind of capitol is spelled with an “o” and not an “a”? Definitely an educational trip.  For me, at least. Now if only someone explained when to use effect vs. affect…
Although pleased to learn that Ronald Regan was the man who rocketed the Jelly Belly into stardom, gold still remains in the American River and anyone can hop in and start panning, and in just this year someone attempted to steal the original Golden Spike…It was the hours spent with 27 4th graders on an airplane, in a bus, and at a hotel where I was really educated.
10 Things I Learned Spending 4,197 Consecutive Minutes with My 10 year Old
1.  As much as things change, they always stay the same.  We might be staying in a hotel 504 miles       from home but a 10 year old will still leave each and every personal item spread across every surface of the room.
2.  Parenting a 10 year old is a sensory experience:
Sight: They will engage you in conversation that you desperately try to follow while attempting to
ignore the extremely large glob of ketchup on their face.
Touch: They have no concept of personal space.  They are continually touching you, walking into
you because they can not walk in a straight line, or blocking your view from anything you’d
like to see.
Smell: 3 words no one wants to hear on a bus full of kids “Pull my finger.” No further explanation
needed.
Sound: Does anyone have an inside voice anymore?
Taste: They will put just about anything in their mouths to impress their friends.  Then they’ll
smile sweetly and politely ask if  you want some.  My son sampled all the gross jelly beans at
the Jelly Belly Factory: barf, skunk spray, booger, baby wipe and yes, even canned dog food.
3.  A 10  year old is a walking contradiction. They know everything and need no input from their mothers until they suddenly know nothing and want their mothers to do everything.
10:03 a.m.
“Honey, why don’t you put your shoes over there so they don’t get lost.”
“I know mom. I don’t need your help!” (Is there an exasperated font?)
10:06 a.m.
“Mooommmm! I can’t tie my shoe. Can you do it for me?”
“Wait, I thought you didn’t need my help?” (Insert sarcasm font?)
4. The energy of a 10 year old never ever wanes.  The energy level of his mother, however, does.
5. 10 year olds and their parents seem to be caught in a vicious cycle.  They want to be left alone, be more independent and nagged less.  Then they do stupid shit that forces us to not leave them alone, pull back on the independence and nag them.  They get frustrated and do more stupid shit… forcing us to leave them alone even less, take away more of their independence and increase the nag factor.  They in turn get more frustrated…. See where I’m going here?
6. 10 year olds seem to be physically incapable of blowing their noses and will snort snot until it shoots literally into their brains before they will ever grab a Kleenex.  Mothers seem to be physically incapable of ignoring the constant sniff, sniff, snort and will repeat ad nauseum “Blow your nose. Blow your nose.”
7.  Life would be easier if all 10 year olds were perpetually hooked up to a feeding tube.  They’d be pleasantly full and we’d be spared the task of feeding them every 52 minutes.
8. 10 year olds want to complain about everything, while simultaneously arguing with any suggestion you make to solve the problem.
“My feet hurt.”
“Why don’t you sit down.”
“But I wanted to go in that store over there.”
“OK, then go in that store over there.”
“But my feet hurt.”
“What would you like me to do?”
“I don’t know.  But my feet hurt.”
“Why don’t you just tell me what you’d like me to say here.”
9. In 4 years, when your class goes to Washington D.C. and New York for the 9 day study trip… I’m sending your father.
10.  10 year olds are like a bag of assorted Jelly Belly jelly beans- some sweet, some sour, some a unique combination of flavors and colors, some downright gross… But when you find some in the bottom of your purse… Wait, that’s not right. When you invest in a bag,  you always get your money’s worth and they definitely bring a smile to your face.  (Well, except for the canned dog food flavored ones. Those just make the whole bus to stink and force you to barf in your mouth a little, so just toss those out.)
You can learn a lot spending 4,197 consecutive minutes with your kid.
That’s just my normal.
**Thanks for being patient while I’ve been MIA for the past month.  I appreciate you sweet people who have messaged me asking for your dose of “normal.” Lately my “normal” is to suddenly realize it’s 10 p.m. and I have no idea where the day went! Oh and a severe case of writer’s block;)**