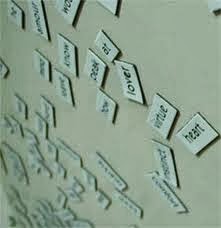 Somehow, mothers in Africa have become my “guilt barometer.” I’ve developed this bizarre habit of comparing my life with the lives of these women, ultimately, coming to the conclusion that I am a selfish white woman who should feel guilty.  All the time.

“I feel guilty for grabbing coffee in the middle of the day.  Mothers in Africa don’t get to hang out in Starbucks.”

“I really wish I didn’t have to work.  Wow, I’m a jerk.  Mothers in Africa would love the have the opportunity to work.  Now I feel guilty.”

There are many reasons why this is one of the most ridiculous (on an extremely long list of ridiculous) things I do. First, in my mind all mothers in Africa live in tiny houses in the middle of nowhere.  This is an absurd and probably offensive stereotype.  In my defense, I did grow up in the “We Are The World” era. I blame the combination of Kenny Rogers, Cindy Lauper and Lionel Richie sharing a microphone- that can skew anyone’s perception of reality.

Second, if I have learned anything in my 10+ years riding this roller coaster called Motherhood, it’s the universality of the motherhood experience.  Whether you live in America, Saudi Arabia, India or even Africa, all mothers lie awake at night and worry about their children. All struggle with making decisions about what to feed them, what freedoms to give them and how to discipline. And deep down inside we all fear that although we are doing our best, it might not be enough. That being said, mothers everywhere just want to pee alone.  We just want to clean the house and have it stay clean for longer than a few hours.  And sometimes we just want to sit down with a friend over a cup of coffee and share our hearts or giggle like teenagers.  Those aren’t just Mothers in America things.

And third, almost every country in the world has a Starbucks so it’s pretty likely that even moms in Africa can hit up a ‘bucks with a girlfriend.

And so, I have decided enough is enough. Today I pulled the plug on this guilt thing. I have kicked it to the curb! I have given it entirely too much power in my life and in the words of the great Janet Jackson “what has it done for me lately?” (You know you’re all singing that now, aren’t you?) I’ll tell you what all this guilt has done for me- a whole lotta nothing other than rob me of joy and make me an Eeyore of a person.  Woe is me. I can’t do the things I want because I feel guilty.  Guilt can suck the fun right out of ya!

But no more, I tell you! As I had this epiphany today while running on the treadmill (Before you ask- Yes, I felt guilty for working out at 12:30 in the afternoon. Mothers in Africa probably didn’t get to do that.) I realized that if I remove guilt from my life, I am going to have an insane amount of free time.  Like hours and hours of unoccupied mental space.  So what could I possibly fill it up with?

I’ve decided to take up macrame! I kid…

That’s when I had my second epiphany- good thing they happened rather close together, I don’t have much stamina and I was starting to huff and puff on the treadmill.  (Yes, I felt guilty for having a treadmill in my garage.  Mothers in Africa… well, you know where I’m going here…) I have decided to replace my guilt with gratitude.  Now don’t you worry.  I won’t become one of those annoyingly positive cheery people who smiles all the time and thinks the world is rainbows and unicorns.  There’s way to much sarcasm running through these veins to become that person.  And as much as I want to smack myself in the back of the head for being a Negative Nelly I would want to throat punch myself if I started acting like Emmett from the Lego movie, singing “Everything is awesome!”

The simple truth is this- I am blessed beyond measure and I am able to do a million different things in this life.  Not everyone has that privilege.  But swimming in guilt or talking myself out of doing things that are reasonable simply because someone else doesn’t have that opportunity will not change their circumstances.  But it will certainly change mine because in the end I am the one left with a missed opportunity.

So it’s time to start doing things and doing them with joy and enthusiasm and without guilt. And most importantly, doing it with an attitude of gratitude.  I realize that is one step away from “everything is awesome” or an annoying refrigerator magnet.   But it’s true nonetheless. There’s a reason the refrigerator magnet industry makes billions.  (I totally made that statistic up, by the way.)

I will embrace the circumstances of my life- the good the bad and even the ones that talk back and leave their shoes all over the house- and I will do so graciously because even if mothers in Africa can’t, I can. And I will do it for the both of us!

My life has become a refrigerator magnet.
That’s just my normal.

P.S. Thanks to all you sweet readers who have emailed or messaged me looking for your dose of “normal.” You’re all incredibly kind.  Sometimes life gets so busy it’s hard to find the time, the funny and even the words.  Thanks for being patient.