It’s been 172 hours since Christmas Break began. But who’s counting? I’m not.  Not at all.

Since the dismissal of class 172 hours ago we’ve had a lot of fun.  There’s been hot chocolate, excessive viewing of ‘Elf’, a CPS-worthy amount of television watching and enough Rainbow Looming to span the globe. Twice.

Oh, and there was this thing called Christmas thrown in there as well. You familiar with Christmas? It’s the time of year when every child squeals with delight as he or she forcefully removes colorful wrapping adorning gifts they’ve “always wanted” as their mothers smile and clap with feigned enthusiasm while muttering  “Where the f%*@ are we going to put that?” through clenched teeth.

According to my Facebook newsfeed, everyone is having the best Christmas Vacation of their entire lives! Everyone has been smiling uncontrollably for the last 172 hours. Their children have passed the hours wearing Santa hats and hugging one another in between caroling and decorating perfectly proportioned Christmas trees and engaging in silly banter with creepy elves that mysteriously appear in quirky places throughout their homes.

Facebook is a liar.  A big fat photo liar. How do I know that? Because I posted this picture today… 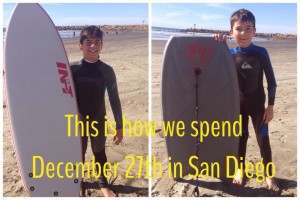 Approximately 4 minutes later I was standing at the water’s edge talking to Hubs, watching the boys surf while bawling my eyes out. Not kidding. There was hiccuping and a fair amount of snotting going on. Maybe I should’ve taken a selfie of that loveliness, huh? #iamlosingmyshiznit #cryinginpublic #hystericalmom

I’m going to spare you all the “don’t-get-me-wrong-I-love-my-kids-they-are-great-and-make-me-a-better-person-than-I-would-ever-be-on-my-own-and-are-such-unique-individuals-that-make-me-see-the-world-through-their-innocent-eyes” crap because right about now I think I would be a pretty kick ass person with a great worldview without either of them. And I certainly wouldn’t standing at the beach crying like a fool- that’s for sure.

What’s worse is that after Hubs listened and consoled and sent me a verbal hug through the phone I pulled my chair up to the water line and continued to watch them while feeling like the worst mom because I had absolutely no desire to be in the water with them. None.  There wasn’t even a millisecond where I thought to myself, “It would be really fun to go swim with them and cheer them on as they ride the waves.”

So as I recovered from my ugly cry and did that weird hiccup-snot-heaving-chest-thing, I was drowning in a thick layer of guilt.  If you know me in Real Life, this is not hard to imagine. I pretty much live wrapped in an “I feel bad/I feel guilty” sweater.  Seriously, I wear guilt like a second skin.

At the same time, I feel justified in my lack of desire to hang with them. I have spent the last 172 hours (and 17 minutes) with two children who are loud, messy, bickering, arguing, shit starting, whining, poking, giggling, goofy, suffering from selective hearing, potentially blind and perpetually hungry.  And we still have 9 more days until school starts.9. more. daaaaaays!

How is it possible to forget what I asked you to do 3 seconds ago? Now I’m perimenopausal so I definitely have so memory issues.  But what’s their excuse? How can you forget to feed the dog (a job you’ve been doing EVERY morning for the ENTIRE 3 years we’ve had this dog) after I reminded you less than 10 seconds ago? How can you possibly say you are done cleaning up downstairs when I still can’t find the carpet under all your crap? Since when does putting the laundry “away” mean shoving it in any drawer you can find, then leaving the drawer open for me to crash into?

How in the HELL are you hungry AGAIN? I JUST fed you like 47 minutes ago! You went 6 hours between meals when you were 7 weeks old!? Do you have a tapeworm?

And the answer is NO! No, I don’t want to see your triple single sailor’s knot ladder Rainbow Loom bracelet! Know why? Because it looks exactly like the other 17 you’ve shown me today!! I’ve run out of positive responses and you should be catching on by now because there is no way they are all “amazing!” It’s not possible for every single one to be “amazing!” The word in and of itself implies something unique.  If you’ve made 17 of them in the last 10 hours there is absolutely positively nothing unique about it.  So that makes me a liar!! Catch on, kid!

And could someone please explain to me how the heck does your bedtime keeps getting later and later every night?

So for those of you who truly love Christmas Vacation, Easter Vacation, Summer Vacation and any other vacation your child’s school has created to cut back on expenses, more power to you.  You are the moms posting happy pictures on Facebook and are not crying behind the lens.

But for the “other moms”, I’m coming clean.  I LOVE my kids.  They ARE funny.  They ARE unique. And I DO love being their mom.  But at this moment in time I’m willing to let the government tax the hell out of my measly wages to give teachers a raise or shorten all vacations to 3 days maximum. Who’s with me?

The “Break” in Christmas Break is a vicious lie.
That’s just my normal.

*Thanks to those of you who have ordered The HerStories Project book. Your support and sweet messages have been so encouraging. If you’ve read it and would like to write a review on Amazon we’d appreciate it so much! We’d love to know what you think! If you haven’t bought it yet- you’re dead to me.  Just kidding.  It’s still available on Amazon so head on over and order yourself a copy.  Trust me, you’ll be glad you did.