I love that The Hubs and I were created equal yet different.  The differences between us are what often make him the better parent or more considerate spouse.

Other times, however, these differences leave me plain ‘ol befuddled.

For example, we have this… 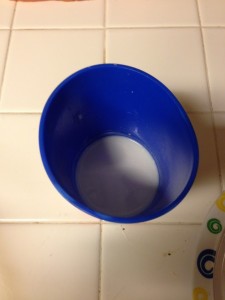 Had I found this mysterious cup ‘o milk things would’ve gone down like this:
“Oh gross! Which one of you kids shoved a cup of milk in the back of the fridge?! I’m waiting. Someone better own up to this.”  Both children would have admitted to it simply to end the conversation, hoping to cut the crazy off at the pass and I wouldn’ve dumped the semi-solid mass into the sink while running hot water, cut up half a lemon to eliminate the smell, rinsed the cup and put it in the dishwasher.  Seems pretty logical, right?

Example 2: This is our garage.

As you can see on the left side I have a home gym.  I use this home gym 4-6 times a week and it can be considered a “high traffic area.”

On the right side we have “the rest of the garage.” This portion of the garage houses the boys’ bikes and skateboards as well as approximately 30 years worth of toys, games and other collectibles The Hubs has acquired.

When The Hubs decided to put away all the Gaming Group folding tables and chairs that we are now the proud owners of, he chose to put them in the high traffic, oft used gym portion of the garage rather than the side that has not seen the light of day since we moved in 10 years ago.

And lastly, we have this conversation to show the unique differences between men and women…

After finding out that we were on the receiving end of a 20% pay cut a few weeks ago (Yay Corporate America!) The Hubs and I sat down to evaluate our budget and see where we could make some fiscal changes.

The Hubs: Well, we can definitely cut back on our grocery budget by doing a better job of meal planning and shopping weekly specials.

Me: Totally.  We can make Sunday morning meal plan days and you can grocery shop some time that day.

The Hubs: Great idea.  I can definitely be better about bringing my lunch each day.

Me: Good point.  I can cut things like Slurpee Wednesday with the boys and cut back on how often we “grab lunch or a snack” when we’re out and about.

The Hubs: That’s awesome.  I am going to cancel our cable and switch to Uverse.  That will save us almost $100 a month.

Me: Wow! That’s awesome.  I can cut out extras like waxing.

The Hubs: Well, hold on now.  Let’s not get hasty here.  There’s another page or 2 of our budget we can examine before we make rash decisions like that. Don’t get too crazy.

Me: Really? Waxing is a non-negotiable?

Men are definitely a different creature. No better. No worse.  Just different.
That’s just my normal.