Last week I was reading one of my favorite blogs- Cloudy, With a Chance of Wine when she posted this fantastic gem “10 Things I’d do if I could be a man for a day“. If you haven’t read her stuff, get on over there- NOW.  She is the epitome of how a blogger gets it done, in my opinion.  Although it isn’t really just my opinion as she and several other bloggers I idolize  follow were recently published in a book called “I Just Want to Pee Alone”. Don’t think that’s funny? Don’t get it? Clearly you are not a mom.  Let me give you a visual to explain what the title… 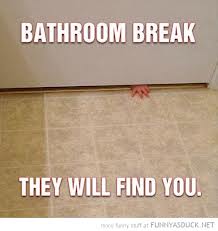 Now do you see why this is funny? It’s true. Oh so true.
As I was reading Cloudy’s post about the things she would do if given the chance to be a man, I realized I don’t really have the desire to be a man.  When I was younger and newly married I definitely had my “Men have it so easy days” but as I’ve grown up and actually lived with a man for 13+ years, I came to discover that being a man ain’t all it’s cracked up to be.  First of all, I’d have to live with me.  That in and of itself makes the whole thing less than appealing.
So although I don’t really want to be a man (in spite of the awesomeness that is going to the bathroom at anytime, regardless of location, without fear of peeing on your own pants and shoes) if someone were to offer up a chance to be a DAD for a day, I’d be all over that a la Hermione Granger wildly raising her hand and chanting, “Me! Me! Pick me! Pick me!” Why, you ask?  Here’s why…
10 Reasons I’d Like to Be a Dad For a Day
1. Take my child shoe shopping and buy any pair of shoes he wants- including high tops, mid tops and the ones with the crazy long laces.  And I’d buy them while doing the Moon Walk around the store going on and on about how these are the freshest kicks on the planet and NOT going on and on about how it takes the child 27 minutes to cram his foot into the freaking shoe and another 13 minutes to tie the mile-long laces thereby making us late for school every single day.
2. Help my child tie the Rapunzel-like laces of his new shoes using a quadruple knot with no regard for the fact that at some point in the day (probably in a public bathroom with a cart full of stuff) these shoes will need to be removed and the jaws of life will be required to get the knots out.
3. Walk in the door after being away all day and have my kids scream my name, jump up and down and fly at me from any location in the house.  Because my arrival tends to signal the end of something awesome like a play date or school the reaction I typically get is, “Awww. Really? Do I have to go? Why did you have to come now? Can’t I have 5 more minutes?” Nothing says “I missed you, Mom” quite like your kids begging for 5 more minutes before they must alone with you.
4. Feed my children with no regard to what they ate before, what they will eat later, grams of sugar, or the latest Facebook posts about how we’re slowly killing our children with the foods we feed them.
5. Let my kids watch 3 movies in a row without feeling guilty or like people “just know” and are judging me as a bad or lazy parent.  I love that about my husband, by the way.  He can just BE- it is what it is, no more, no less. “They’re watching more t.v. than usual, no biggie. It’s just one day.”
6. Show up at Open House and “ooh” and “ahhh” over the kids’ projects having no memories of the blood, sweat, tears, hot glue gun and multiple trips to Michael’s it took to make these these masterpieces.
7. Wake up in the morning blissfully unaware that both children had a bad dream during the night and wandered into our room to stand silent vigil next to the side of the bed, staring and using some sort of voodoo mind  meld to wake me up from a dead sleep with a heart attack and gasp.
8. Stand up and fart, walk and fart, even breathe and fart causing raucous laughter to break out and earning a high five of approval rather than an admonishing eyebrow raise and a “Mom, that’s gross” when I let even the smallest burp loose.
9. Dance around like a fool… naked.  When The Hubs does it, the kids strip down faster than Magic Mike and break into booty shakes and pelvic thrusts.  If I even so much as hop around with a towel on I’m told that’s “inappropriate” or “weird.”
10. Answer one and only question on a daily basis.. “Where’s Mom?”
Being a mom is awesome- no doubt about it.  I love that I’m the one they call for when they’re scared or hurt and I recognize that I am the default, go-to for my boys because relying on me is as natural as breathing- they have no doubt that when they need me, I’m there. But it would be equally awesome to be the Fun Dad once in a while. And dance around naked.
I love being a mom, but wouldn’t mind being a Dad for a day.
That’s just my normal.