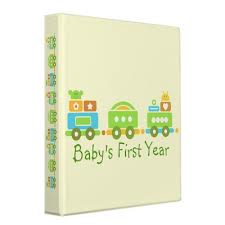 There are certain milestones that every parent expects to meet- Baby’s first smile, first steps, first words.  Those are the biggies that keep the scrap booking aisle in Michael’s stocked to the gills.  DS1 has a beautiful commemorative calendar filled with stickers acknowledging all his “firsts” as well as three scrapbooks.  And DS2 has, well, uh… a lot of great pictures sitting in the camera for the last 6 years? Poor second child.

I think there is a market for a non traditional Child’s Firsts book.  Who’s going to remember the first time your child drops an f-bomb? What about the first time he or she screams, “You never listen to me! I hate you!”  And let’s not forget the first missed curfew or getting caught making out with your boyfriend in your room… Wait, was that just me? Pretty sure my dad will have that horrific image burned into his brain for the rest of his life- no cute sticker on a calendar needed for that nightmare.

**I’d like to add here that as I made the boys’ lunches this morning I was trying to figure out what to write about tomorrow.  I went through my notes of “posts to work on” and nothing was speaking to me- other than the usual voices in my head.  So I shrugged it off and said to myself, “Eh, maybe something will happen today that will be bloggy…” Pretty sure that means I brought this event on myself.**

You see, today I experienced the mother of all Baby’s Firsts… Where do babies come from?  Now I’m not totally shocked this happened.  DS1 is now just over halfway done with third grade.  Hubs and I knew that we had about 3-6 months before the conversation was going to come up organically and initiated by our darling boy or we were going to have to sit down and start the conversation ourselves.  I’ve done a bit of reading and it seems 4th grade is when the “kids who know” start coming out of the woodwork and start chatting on the playground.  So we wanted to make sure we got to our little guy first with both the technical and moral information before he got the version his friends decided to share in between arm farts and saying the word “butt” every three seconds. 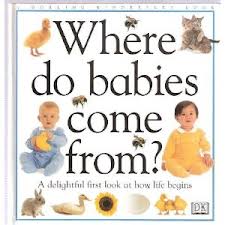 On a side note: If you ever want to be totally entertained and mildly offended,
go to Google Images and look up “Where do babies come from.”
Good Lord there is some interesting stuff!

However, it seems there was a third option we never considered: a sweet friend coming home with us after school and spilling the beans while we were all in the car.  Let me set the scene:

DS1 and Friend were in the 3rd row.  DS2 was in the middle row and I was driving- obviously.  We had already stopped at 7-Eleven for Slurpees and Michael’s for a box of 1,000 Popsicle sticks because they really wanted to do a craft.  A craft!! Could this be any more innocent?  Approximately 2 miles from home I tune into the conversation in the backseat and it’s going a little something like this:

Friend: “Moms have eggs that get fertilized. Dads have the fertilizer stuff but the mom has the egg.”
And because DS1 does not believe anything until he discovers it himself, he responds with: “Yeah, that’s not true at all dude.”
Friend: “Yeah it is.  My dad told me…” and then there was a bit of whispering as we pulled into the driveway.

Please note that I tried three times to redirect the conversation once I realized where this was headed.
“Hey Friend! You wanna play Mine Craft when we get to our house?”
“Sure! As I was saying…”
“Hey Friend, did you like your Slurpee?”
“I sure did.  Thanks again for taking us.  So as I was saying…”
“Hey Friend! I’ll pay you $100 to stop this conversation immediately because I am NOT prepared to have it while in my freaking driveway!!!”

OK, so maybe I didn’t say the last one.  But you get my drift.  Redirection was a big fail.

Interestingly, as soon as we pulled up at home they were off to build Popsicle stick skyscrapers and play Mine Craft.  End of discussion.  But the seed had been planted- yes, a totally intentional pun there. And after my Darlings crawled into bed I told Hubs a storm was a-brewin’ and it was quite possible a trip to the book store and some Daddy/Son time was going to be on the agenda for the weekend. 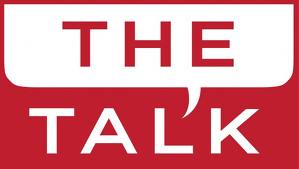 I have to add here that I’ve had several people tell me recently that they read that having “The Talk”  is not the way to do this anymore.  It takes something natural and makes it awkward and out of context.  Instead, these conversations should happen organically.  We should use terminology like “sperm” and “ovum” and “procreate” and “mating” in a natural setting so the conversation develops naturally.  Um, I’m not sure what kinds of shows these people are watching but there is not one thing on our television that would lend itself to a natural conversation using the work sperm.  Heck, I’m not even exactly sure what an ovum is! The only way this conversation would unfold “organically” is if Hubs and I forgot to lock the door one night while have “relations.”  And trust me, there would be few words flying around the room other than, “Oh s@!*” and “Hand me my pants!”

So Hubs and I chatted about it a little more last night and decided to wait it out a bit.  If after this illustrious seed has been planted, DS1 doesn’t present any follow up questions, we are going to hold off til Spring or Summer as planned and then go the more traditional route of Dad/Son breakfast with a side of awkward conversation.  I asked him if he thought I should bring it up naturally to set the stage for their talk.  That got the big N-O. “Babe, there is no way you can bring that up and not expect to have to answer some questions immediately.”  Good going, honey.  See, he’s so smart, that man of mine.

Note to those who have not yet had the pleasure of The Talk:
This is not a bad idea.  It’s not too late.  Definitely do a practice run.

It was officially 24 hours since Fertilizationgate and not a peep.  We were in the clear.  It looks like a Spring Conversation will be had.  So appropriate with the flowers and pollination, no? See? I can use the words in natural conversation.  Does a flower have an ovum?

Anyway, little did I know that The Talk was actually going to occur naturally.  On the one night Daddy is working late.  And DS2 (who is 6 mind you) is present and totally participating.  It went a little something like this…

And before I could even begin to formulate a thought, DS1 chimes in with…
“I know how.  Friend told me yesterday.”

So I take a deep, cleansing breath and say… “Oh yeah? What did Friend tell you?”

Luckily it’s at this point that I realize that my sweet 9 year old is as mortified as I am.  He is bright red, trying not to laugh and will not make eye contact with me at all.  But, like his mother, he was able to take a deep breath, man up and fill me in on the ins and outs of sex ed, 3rd grade style.

“Well, he said that Moms have an egg and Dads have fertilizer and they put them together and that makes a baby.”

Whew! No prob! I can totally handle this until Daddy has The Talk.

“Well, honey, he’s right.  When a Mom and Dad are married that’s what happens.”

And then DS2 has to start flappn’ his trap.  That kid is so not my favorite kid, I’d like to add.
“Well, how does that happen? How does the egg get fertilized?”

Aaaaannd cue awkward pause while DS1, who clearly takes after his mother, squirms in mortification before he composes himself and replies with…

“Well they put their wieners together for 12 hours in their bed.  They have to lay really still for 12 hours.  Then the egg gets fertilized and a baby is made.”

Um… What? 12 hours? Boy is this kid setting himself up for failure or what? And God help the wife that has to lay still for 12 hours.  I would totally have to pee like 6 times in that span of time.

At this point I’m again trying to organize my thoughts in an efficient manner and come up with a mature and appropriate response.  I want to let him know that Friend is right- mostly.  I want to discuss the importance of being married.  I want to make sure he leaves the couch knowing he can always talk to Mom and Dad about anything, even the terribly awkward stuff- like the conversation we were presently having.  I want to make sure he knows that this is special and beautiful and private.

But DS2 has other plans.  In the 20 seconds it takes me to process and prepare he pulls out one and only one statement…

“YOU PUT YOUR WIENERS TOGETHER!? ARE YOU SERIOUS!?!!?”

And this is why I never intended to have this conversation with a goofy 6 year old in the room.  The upside is that it certainly relieved the awkward tension that had built in the 20 seconds that I was processing.  The downside is he spent the next 10 minutes laughing, yelling “you put your wieners together?” and trying to reenact it in the kitchen.

Instead of addressing his madness, I approached DS1 and said all the things I needed to say.  We chatted about the stuff that mattered- love, marriage, babies, privacy, maturity, and how happy we are that something that seems so “weird” gave us him.  We both were still a bit embarrassed and I certainly had to fight to keep eye contact, and I definitely told him he had the basics but the details were a little off.  Luckily, he told me he got the gist of it and didn’t feel he needed any clarification.  And life returned to the usual end of the day battle of brushing teeth, wrangling jammies and cheering and laughing while watching the saline solution shoot out of his nostrils- thank you Neti Pot! Laughter really is the greatest medicine.

So in the end, I think I would call that Baby’s First a success.  Sure I was not really prepared.  Of course there were things I probably should have said.  Definitely I could have been a fewer shades of red and my eyebrows didn’t necessarily need to disappear into my hairline as I tried to come up with the appropriate response.  And I probably shouldn’t have threatened DS2 that if ever hear he said the word “wieners” at school he’d be in more trouble than his little mind could imagine.  But all in all, I think we passed Baby’s First Awkward Talk About Sex with flying colors.  And Daddy wasn’t even home.  Go me!

I will never again worry about whether or not I have something to write about because Life always provides good material.
That’s just my normal.