I always thought the stereotypes about men and sex were true. I thought they sat around talking about it all the time- after golf, over lunch, while drinking beer. It’s all conversations about how “hot” it used to be when they were first married, lamenting about the annual blow job or how sex is something they’ve not to expect, only hope for. I mean that’s how it’s portrayed on TV, right? We’ve all seen “Everybody Loves Raymond.” That guy is always begging for sex. Of course if I was married to that guy I’d have a hard time getting “in the mood” too. I believed that married men talked about sex and it was typically because they weren’t getting any.

So I decided to just as Hubs. One day when he got home from hanging with the guys I just blurted it out, “Do you guys talk about sex when you’re hanging out?” Initially he just stared at me, looking a little confused- it’s a look I’ve seen often so I knew just to wait a moment or two. Once he realized I was serious he took a deep breath and explained. “The truth is, babe, that at this point in our lives we’ve all been married a long time to women that we have solid relationships with. We can talk to our wives about pretty much everything. You know, communicate? So most of us aren’t ‘going without’ and if we are it’s because we’ve failed to bring it up for discussion.” Wow, he’s so wise. I love it when my man schools me on the ways of the world. His smarty-ness is super hot.

Unfortunately, at this point the conversation took a little detour down Awkward Avenue because I was not prepared for his follow up question. “You and your friends don’t talk about sex either, right?”

And so it was time to pull back the curtain, reveal Oz and invite him into the Inner Sanctum of Wifedom.

Women talk about sex.  We don’t brag about it and we aren’t raunchy.  We may have a few really close friends with whom we share a few more details, but we tend to keep it pretty general.  For the most part, when women talk about sex they stick to 2 main topics:

1. Frequency
2. Finding the energy to do it

That’s it.  For such complicated creatures that tend to over analyze everything, sex is one of the few things that we can break down to a few simple details.

The first is easy.  For most women, frequency is something we struggle with mainly because we are not men.  Shocking I know.  We don’t think like men and we often are afraid to ask our men their thoughts so we have a lot of misconceptions about how they feel and what they think.  I am not going to say that because we are women we don’t want sex with the same frequency as men because that is just not true.  At all.  But sometimes, some women have a harder time talking about it.  In fact, a lot of the women I’ve talked to have never had a conversation with their husbands about how often he’d like to have sex.  Mostly they just assume their men just want it any day that ends with a -y and if they have a pulse.  But that’s not always true.  How do I know this? Because I’m NOT one of those women who’s afraid to talk about sex with her husband.  I pretty much talk about everything with my husband- much to his chagrin.  The upside, however, is that there is noooo miscommunication in our house about needs. 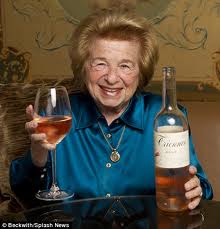 I asked.  He answered.  Sure, sex is high on the list of Things I Think Are Freaking Awesome, but it’s not necessarily #1.  They aren’t 17 anymore.  He informed me that most men were obsessed with sex in their early years because they weren’t getting any.  As married men in solid relationships it’s more of a given than a challenge so they don’t have to worry about it anymore.  Interesting.  Also, they’re grown ups now with jobs and kids and hobbies.  The list of Things I Think Are Freaking Awesome has expanded to include non-sex-related items.  If you want to know where sex lands on your husband’s list… just ask him.  And if you’re embarrassed? Pour yourself a drink- Maker’s Mark, of course- and muster up some liquid courage. Trust me, he’ll be glad you asked. See? Dr. Ruth even things a glass of wine is an excellent way to initiate an intimate conversation.  And she’s a sex expert.  A sexpert, if you will.

The second topic women seem to talk about is less simple- finding the energy to do it.  We all know how mentally and physically taxing life can be- especially when you’re a mom.  There is so much stuff going on in your head when you’re the primary caregiver.  Remember this post? That was no joke.  There are really that many things going through my head at any given time.  Most of my day is spent as Mom- not Me, not Wife, not Employee.  Mom.

So when 10:00 rolls around and all things on the To Do List have been marked Complete or I Give Up, the last thing I want to do is turn into Sexy Wife.  A lot of the time I’d rather be one of my other personalities: Sleepy Wife, Make Me a Drink Wife, or Hubs’ least favorite We Need to Talk Wife.  I have to say that after almost 13 years of marriage he has managed to combine Make Me a Drink Wife and We Need to Talk Wife, therefore creating Easily Distracted Wife.  I think she’s his favorite.

All joking aside, it’s not easy switching from Mom to Wife as soon as Hubs gets through the door.  For instance, when I”m bending over pulling the kids’ dinner out of the oven and he tells me that I’m hot and he’s so glad he married me… I’m not swooning.  I don’t mean to sound ungrateful, but let’s be honest here… CHICKEN DINOS ARE NOT SEXY!  Trust me, I know how blessed I am to have a husband who compliments me and finds me attractive.  More women should have my “problem.”  But it’s all about timing, dude.  Switching from Mom Making Dinos to Mom Shaking Her Money Maker is not a feat many could seamlessly execute.  It’s not just me.

But fear not, men.  We are not sitting around discussing performance or size or anything too personal. Mainly we talk about how much we love our husbands and want to meet their needs.  We talk about our guilt that we can’t always do that or that sometimes we don’t even know what those needs are and we’re a little too embarrassed to ask.  Sometimes we might even talk about the times we pretended we were asleep or were distracted by the grocery list we were compiling in our minds. And other times we talk about where to buy sexy lingerie, the latest article in Cosmo about how make your man’s toes curl and we definitely talk about “Fifty Shades of Grey.” Sometimes talking ain’t so bad, wouldn’t you say?

Women talk about sex.  Maybe even more than men do.
That’s just my normal.