So everyone remembers this commercial, right? Sorry about the crummy image, but it’s from the 80’s. Isn’t everything from the 80’s fuzzy? But I think a blurry image is the least of my concerns here. Why in God’s name is this woman taking a bath in the Parthenon? Did everyone see the Grecco-Roman pillars in the background? Is it actually Toula Portokalos in the tub? Is the tub filled with Windex? And don’t even get me started on the fact that the woman clearly has an a-hole for a boss who yells at her and it’s apparently “Dress Up Like Your Favorite President from the 1800’s Day”. Why is the bow on her shirt so incredibly huge?
But fashion sense of poor home design aside, I can relate this lady a little bit. It might not be the dog and the boss and the baby- but it’s definitely the cell phone ringing, the inbox binging, the Words With Friends tinging and the kids, well, asking me 187 questions in succession. I get it, lady. Every mother gets it. We are constantly pulled in 15 different directions by at least 10 people who want completely different things that need to be addressed IMMEDIATELY. I am forever feeling that like I give a tiny bit to everyone until I am simply a living, breathing example of Pointillism- one woman made up of little tiny dots. It’s exhausting and often leaves me feeling like no one really ever gets enough and I never do anything with my full attention. Feel familiar? 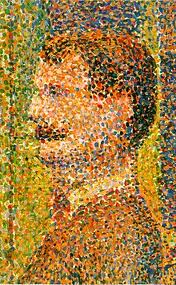 See this dude? That’s me. Lots of tiny pieces put together to make one person.
Well, minus the mustache. Usually. You’ve read about the
Rogue Hairs, right?
So I definitely get the feeling of frustration and the need to escape. I’m pretty sure I’ve discussed this before. Remember this post? I openly admitted some pretty embarrassing things I’ve done to avoid my kids and get a break- faked Irritable Bowel Syndrome for a little potty privacy, faked a work phone call for a tiny bit of peace and quiet, “folded laundry” for over an hour in my closet as a cover for actually hiding in the closet. I’m sure this all sounds familiar. I actually had a friend tell me she starts to fold laundry and her kids scatter in the wind because they know she’s going to have it ready for them to put it away in a matter of minutes. Brilliant woman, that friend of mine. Every mom has her particular trick up her sleeve to get a tiny break from being a Mommy. And I’m sure we’ve all got things we do to unwind once the kids go to bed that we probably wouldn’t advertise publicly- especially if Grandma and Grandpa read the blog. Yes, that’s Maker’s Mark that is continually showing up on my Facebook newsfeed. Best “like” of my adult life.
I know for some people a nice soak in a luxurious bath, overflowing with bubbles, while being engulfed in the sweet smell of jasmine or lavender is exactly what the doctor ordered at the end of a long and difficult days of slaying the dragons of mommyhood, scented candles flickering along the tub’s edge, creating a romantic and relaxing atmosphere while soft music floats along the air… sounds relaxing, doesn’t it? Can’t you just feel your muscles relaxing, losing the tension of the day. Isn’t your brain slowly but surely releasing the stress and chaos it once held? Can you feel it? Are you with me?
Well, if you’re relaxed and enjoying these images… then you are definitely NOT with me because I loathe taking a bath. I mean totally and completely detest taking a bath. No, it does not stem from some traumatic childhood experience when my brother drowned my Barbie or I choked on water while pretending to SCUBA dive. In fact, it never occurred to me to hate baths until the 9th grade when I suddenly realized that the relaxing mini-pool I had created was actually a cemetery for all my dead skin cells. Yes, it’s true. When you “luxuriate” in a warm bath you are pretty much sitting in a vat of your own sloughed off skin cells as well as accumulated dirt and oil and whatever else has latched itself onto your body since your last shower. If that’s not enough to make you want to throw up in your mouth, I don’t know what is.
So as my friends tell me about reading a book or enjoying a glass of wine while relaxing in the tub all I can think is, “YOU’RE SITTING IN YOUR OWN DEAD SKIN CELLS!!” That is not relaxing. At all. In fact, it is so freaking gross that it makes me want to ask them not to sit on any of my furniture. Or touch me. Or breathe on me. Or come inside my house. OK, I’m just kidding. They can come in. And sit on the floor.
But seriously, I know that I just burst the bathing bubble for you, but you can’t possibly tell me that you hadn’t thought of this fact, right? This is usually when people remind me that I am more than happy to hang out in a jacuzzi for hours on end. I’ve got one word for you people… chlorine. Skin-drying, eye-burning, potent-smelling, chlorine. If I could dump some of that in my bathtub without making myself sterile, I might be willing to spend some quality time in the tub. Might be. But even the idea of tiny chlorine tablets isn’t enough to get me to sit in a tub of myself.
That being said, I am a woman who is willing to admit that she can be wrong. And some people I really like and trust swear by the almighty power of the nightly bath. So, last week I decided to bite the bullet and take a soak at the end of a long, cold day. I even texted my Bath Buddy to let her know. She knows how much I loath the lather so she was really proud of my willingness to take the plunge. “Use lots of bubbles,” she replied. “It’s all about the bubbles.” So I went for it. I wrapped myself up in a terrycloth towel and went to work to prepare myself a nice, hot bath. I spent the 10 minutes required to extract all the kids’ toys from the tub that I swore I’d never let them use when I bought the house. But after spending only 2 weeks trying to squeeze my not-so-small hiney into this little space… 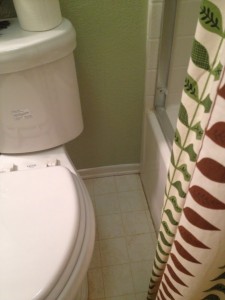 Dear Centex Homes: Anorexics aren’t the only people who give their kids a bath.
Please rethink putting the toilet 16 inches from the faucet in the tub so moms who eat can bathe their children.
Thank you.
I decided that could be the “guest bath” and the boys could use ours. And now my bath tub that I swore was going to be a kid-free zone looks like this… 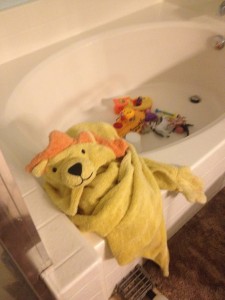 I know this doesn’t look very crowded but the boys recently threw a bunch of their toys on the floor and I was too lazy to gather them up and put them IN the tub to make the picture look more dramatic. So just close your eyes and imagine lots and lots of toys spilling all over. Thanks.
So after clearing out the toys and spending a few minutes wiping down the tub because I know exactly what goes on in there when the boys take a bath together, I was prepared for an evening of luxury and relaxation. For about 2 minutes. Then I suddenly realized I had no bubble bath. Not surprising since I don’t think I’d taken a bath since 1987. But being the intelligent woman that I am, I realized that something like body wash would probably have the same effect. Unfortunately, I discovered we had no body wash either. However, we DID have some Dove Cream Oil Body Wash, courtesy of Hubs. It had the words “body wash” in it. It should work, right?
Ummmm, yeah. Apparently “body wash” were not the words I should have been focusing on. What I should have been focusing on were the words “cream oil.” Because when I poured that stuff into my tub I did not in fact get any bubbles whatsoever. What I got, was this… 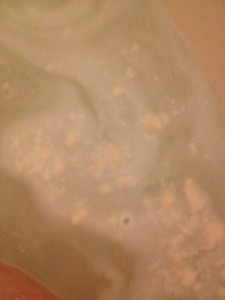 If you’re asking yourself, “What in the ever loving heck is that!?” (or something less appropriate that has a lot of curse words) you are re-enacting my reaction. It turns out, and really who knew this, that cream oil does not actually dissolve in the water and create bubbles and lather. It actually makes something that looks remarkably like curdled milk. Sour, disgusting, curdled milk. And when I freaked out and texted my Bath Loving Friend a picture of what was happening in my bath, her response was, “I swear my baths look nothing like that.” My response, “Uh, I don’t think any one’s baths look like this.” It was literally a dairy explosion. I was just waiting for a spider to come sit down beside me.
I’m sad to report it was all down hill from there. It went from bad to worse when the chunks of cream oil/cream-of-wheat started to dissolve a little, and it created this nasty film that floated along the surface of the water. And I swear that film was laced with my dead skin cells, by the way, taking them from an invisible fear, to a fully visible one. No matter how much I churned the water with my hands and feet- yes, I actually did that- I was unable to create any bubbles. Just waves of oily skin-laden film that splashed over the sides of the tub.
It was awful. Not relaxing. And clearly the Universe’s way of telling me that my fear of baths is totally and completely warranted. Needless to say after 10 minutes of Bathing Failure it was time to abort mission. I released the plug and washed the creamy chunks spiral to their water death down the drain. And let me tell you, I was not the slightest bit relaxed because now I had to clean my tub because I couldn’t look at it without a few dry heaves AND I had to take a shower to remove the excess bits that had latched on to me. It was disgusting.
So the next time I decide to unwind or “take a load off” after a long hard day I will NOT be taking a bath, I can assure you. Instead you will find me probably doing one of the following: 1) Drinking in my pantry or my bed or the family room or, well, anywhere on my property
2) Reading a good book
3) Messing around on Facebook
4) Watching “Big Bang Theory” because who doesn’t love a funny nerd? Bazinga!
The telephone, the boss, the baby, the dog!
Maker’s Mark, take me away!
That’s just my normal.
Julie Bravo, this entire post is dedicated to you, my Bath Buddy! I think it’s going to be a few weeks before I’m brave enough to try the amazing bath oils and bubble bath you sent me. I’m still scarred from my last attempt…