I hate the show “Mad Men”. I know, I know. That is like admitting you hate sunshine or apple pie or Kim Kardashian these days. But it’s true. I tried to get into the show. Hubs and I got all of season 1 from Netflix and we were committed to joining the “Mad Men Bandwagon.” But I have to say, neither of us could stand it. I could not fine one redeeming quality about any of the characters. And THAT’S saying something considering the fact that Sons of Anarchy is one of my favorite shows. But how can you not love a motorcycle gang that fights to keep meth out of their fictional town while simultaneously selling weapons? It’s kind of like a modern Robin Hood- although there is no giving of stolen items to the poor- just illegally importing guns, modifying and selling them to gangs along with protection runs for local businesses by protecting valuable truck shipments from hijacking. See? They’re good guys.
But Mad Men, on the other hand… there isn’t even a tiny bit of that “bad boy with a good heart who’s just misunderstood.” These guys are all just drinking, smoking, a-holes. They cheat on their wives, most of whom sit home basking in the depression of being a 1960’s housewife, while making a living in the advertising world. I know the show has won tons of awards and has become the embodiment of the social and cultural movements of the 60’s, but I just can’t seem to shake the feeling of needing a shower and never wanting to buy another advertised product after each episode. So, after 3/4 of season 1, we gave up. Mad Men went on the clearance shelf next to the ShamWow and Perfect Brownie pan.
But my opinion is just one small drop in the bucket- the show continues and most people I know are still watching with baited breath for weekly new episodes. And the show grows in popularity, not just onscreen but in the marketplace as well. Did you know Banana Republic has an entire line of clothing modeled after the show? Clearly this show has hit on something big. And really, my dislike of the show is just my personal opinion. I am certainly no moral barometer- gun dealing motorcycle gangs, remember?
My opinion aside, it’s clear that Mad Men has become a phenomenon that is not going away. The amount of play this show gets in the media and the variety of arenas in which it is being discussed proves this. And I can see the merits of the show- amazing acting, great writing, and a historically accurate (although embellished for commercial value) portrayal of life for Americans in the 1960’s. It’s just not appealing to me. That’s all.
One of the things that makes this show great (although not my taste) is that it calls to you to find out more. Is it really an accurate portrayal of 1960’s America? Well, do a little research and you’ll see that it is. And just so you know, there is plenty of research available with a simple Google search. What fascinated me most wasn’t the infidelity rate of the time or the impact of wife dissatisfaction on the civil rights movement. What interested me the most was the amount of smoking going on in this show. And apparently I’m not the only one. This is a topic of endless conversations occurring online. Are the actors really smoking? What are they smoking? Is this show simply an ad for smoking? Will the show undo all the progress made in anti-smoking campaigns? Smoking, smoking, smoking…
In some ways it’s funny to have smoking back in the forefront of the media. In many ways, that issue has been snuffed out- pun intended. We have ceremoniously wiped out smoking as an acceptable addiction in America. It seems caffeine is a more palatable obsession for us. We’ve herded smokers like cattle onto small patios in bars, forbade them from partaking of their pass time in any public place and made it socially acceptable to make rude gagging noises, shoot ocular daggers and blatantly attack those who go against the rules. Don’t get me started on how I feel about this issue. Ironically, I’ve never smoke a cigarette in my life. Not one. But I have strong feelings about this issue.
Anyway, one of the casualties of this ban on nicotine nibbling is the decline of the smoke break. Remember the smoke break? You may not be old enough to have worked during a time when the smoke break was actually a part of the daily grind, but you’ve at least seen it in movies, right? People step away from their desks and their work to step outside and well, quell the shakes that are inevitably vibrating through their bodies. Just kidding. Maybe it wasn’t that bad, but it was a break from the nitty gritty to imbibe in some, well, nitty gritty. 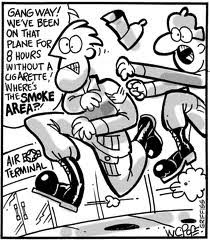 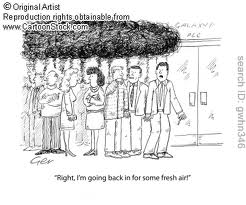 “Working” on my computer while really watching funny YouTube videos while the kids ride bikes is my smoke break. What’s yours?
That’s just my normal.